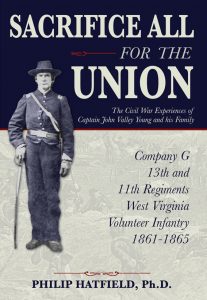 Sacrifice All For The Union: The story of Captain John Valley Young personifies the body of rugged Union Army volunteers from West Virginia during the Civil War: highly resilient, stubbornly independent, and fiercely patriotic. Using Captain Young’s wartime letters to his wife, Paulina Franklin Young, and his daughters, Sarah and Emily Young, along with his diary and numerous other original soldier accounts, this book reveals the experiences of a Union soldier and his family who were truly willing to “Sacrifice All for the Union.” 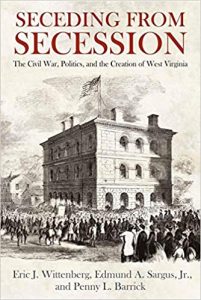 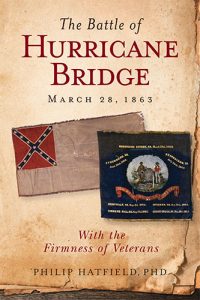 My Reminiscences of the Civil War with the Stonewall Brigade and the Immortal 600
by Captain Alfred Mallory Edgar, 27th Virginia Infantry CSA

The Battle of Lewisburg
by Richard L. Armstrong

The Civil War in West Virginia: A Pictorial History, by Stan Cohen

Campaign in Western Virginia, by George B. McClellan

From the author of the prizewinning New York Times bestseller Empire of the Summer Moon comes a thrilling account of how Civil War general Thomas "Stonewall" Jackson became a great and tragic American hero. Stonewall Jackson has long been a figure of legend and...

END_OF_DOCUMENT_TOKEN_TO_BE_REPLACED

Gray Days in Morgantown, by Clyde Cale, Jr. On April 27, 1863, Confederate raiders under the command of General William "Grumble" Jones came to Morgantown in search of supplies and livestock. The raiders were part of a larger force led by Jones and General John...

END_OF_DOCUMENT_TOKEN_TO_BE_REPLACED

New book: West Virginia in the Civil War by Richard A. Wolfe

West Virginia in the Civil War, a new book by Richard A. Wolfe, has been released by Arcadia Publishing. West Virginia, "Child of the Storm," was the only state formed as a result of the Civil War. The struggle between eastern and western Virginia over voting rights,...

END_OF_DOCUMENT_TOKEN_TO_BE_REPLACED

New Book on The Baltimore & Ohio Railroad during the Civil War

In 1939, Festus S. Summers wrote The Baltimore & Ohio Railroad in the Civil War. Primarily a corporate history of the B&O during the war years, it has remained the only title on the subject for over seven decades! Now there is The War Came by Train. Beginning...

END_OF_DOCUMENT_TOKEN_TO_BE_REPLACED

Calamity at Chancellorsville: The Wounding and Death of Confederate General Stonewall Jackson

On May 2, 1863, Confederate General Thomas J. "Stonewall" Jackson led his Second Corps around the unsuspecting Army of the Potomac on one of the most daring flank marches in history. His surprise flank attack-launched with the five simple words "You can go forward,...

END_OF_DOCUMENT_TOKEN_TO_BE_REPLACED

Quarrier Press has released a reprint of Stan Cohen's classic book, A Pictorial Guide to West Virginia's Civil War Sites. Over 400 photographs, maps, and drawings. Includes 230 sites connected to the Civil War such as battlefields, cemeteries, buildings, and houses....

END_OF_DOCUMENT_TOKEN_TO_BE_REPLACED

Author/historian Steve French has recently published his third book on Civil War action in the eastern panhandle and surrounding region. The new title, Rebel Chronicles: Raiders, Scouts, and Train Robbers of the Upper Potomac, is divided into three parts, and includes...

END_OF_DOCUMENT_TOKEN_TO_BE_REPLACED

A History and Guide to Civil War Shepherdstown

END_OF_DOCUMENT_TOKEN_TO_BE_REPLACED

New book on the Battle of Allegheny Mountain

Holding the Line: The Battle of Allegheny Mountain and Confederate Defense of the Staunton-Parkersburg Turnpike, 1861-62 By Joe Geiger, Jr. Now available from the West Virginia Book Company..... This book seeks to provide a detailed look at military activities along...

END_OF_DOCUMENT_TOKEN_TO_BE_REPLACED

A book review written by Jonathan A. Noyalas on Eric J. Wittenberg's The Battle of White Sulphur Springs has been published bythe Civil War News. Read the review here.... Purchase the book here....