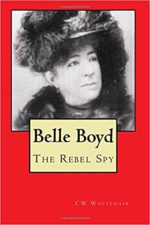 A new book on Confederate spy Belle Boyd has recently been released. Belle Boyd: The Rebel Spy is the first serious non-fiction account of her life in 34 years. Belle Boyd was from Martinsburg, Virginia (West Virginia) and considered the most notorious and deceptive female spy to operate in the lower Shenandoah Valley during America’s Civil War. Boyd fought the war in an unconventional way by using the weapons of a woman’s beauty and a woman’s wiles. During the war, Belle Boyd was imprisoned three times, banished to the South, and eventually banished from the United States, only to become an author and actress in England.

Author CW Whitehair has used various sources, unpublished letters, diaries, and period newspaper articles to chronicle the life of the most courageous female spy serving the Southern cause during the war.